Stone and Knee: An Art Review of Jacob Wrestling With God 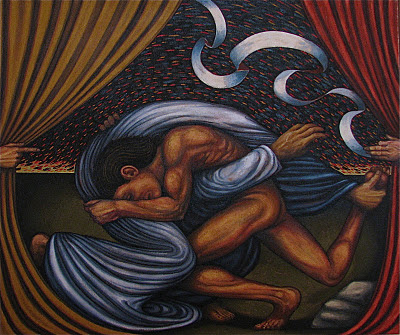 In the painting Jacob Wrestling With God, artist Jack Baumgartner paints Jacob wrestling with God in vivid, yet subdued colors, with energy, movement, and drama. As we look at the painting, we see a ribbon scrolling from the top left to the bottom right of the curtains, which two hands pull back revealing the scene. This ribbon and these hands reappear often in Baumgartner’s work, especially in his biblical scenes. They seem to unite the individual works into a singular narrative, as the scriptures themselves are telling a singular tale.

This scene is Jacob wrestling his God for blessing and identity. God reaches out in the painting and grabs Jacob’s ankle reminding Jacob of his desire for blessing and identity, which he once sought through stealing his brother’s birthright and blessing. God is grabbing Jacob’s “wound.” As Jacob is absorbed in this tussle in the torso of God, we see his right knee bent toward a stone at the bottom right of the painting. We are reminded in this stone of Jacob’s vow at Bethel as he makes a stone into a pillar, an altar of worship (Genesis 28:10-22). This same stone was Jacob’s pillow as he dreamed of a ladder connecting heaven and earth, and now it is a marker of worship declaring God’s house, Bethel, and God’s covenant with him. It is at this stone that Jacob bends his knee to God in worship.

Often when Old Testament authors spoke of knees it was in reference to fear and weakness. In this painting, it is as if God is simultaneously grabbing Jacob’s wound as he bends his knee toward the stone revealing Jacob’s fear and weakness and making Jacob submissive to Himself.

If we are familiar with the New Testament scriptures, we may also be aware that Jesus is referred to as the “Cornerstone.” We may also hear Paul’s words from Philippians 2:10, “That at the name of Jesus every knee should bow. . .” God is wrestling Jacob back into right relationship with Himself, from fear and weakness, to fathered, humbled, and strong, to surety of identity in Him, and to beautiful worship.

Jack Baumgartner is a master at packing in imagery and symbolism into his art, which guides the admirer of his work into depths of beauty and movement, and into “the transfer of energy.” Baumgartner’s work plunges us into the depths of the scriptures to mine for meaning, and to find the common thread of God’s redemption of humanity in His Cornerstone.

For another art review of Jack Baumgartner’s work, Jacob Wrestling the Angel of God, click here.

Are we stumbling on stone, or standing on stone? Are we knees knocking, or bowing with bended knee?

“Then Jacob rose early in the morning, and took the stone that he had put at his head, set it up as a pillar, and poured oil on top of it.” – Genesis 28:18

“Then Samuel took a stone and set it up between Mizpah and Shen, and called its name Ebenezer, saying, “Thus far the Lord has helped us.” – 1 Samuel 7:12

“Therefore thus says the Lord God: “Behold, I lay in Zion a stone for a foundation, A tried stone, a precious cornerstone, a sure foundation; Whoever believes will not act hastily.” – Isaiah 28:16

In Psalm 118:22-23 the psalmist says, “The stone which the builders rejected has become the chief cornerstone. This was the Lord’s doing; It is marvelous in our eyes.” This Psalm clearly echoes the prophesy of Isaiah, “Therefore thus says the Lord God: “Behold, I lay in Zion a stone for a foundation, A tried stone, a precious cornerstone, a sure foundation; Whoever believes will not act hastily (Isaiah 28:16).”

In the New Testament, Peter speaks about this Old Testament passage as well when he references it in 1 Peter 2:4-8. Peter says that we should come to Jesus, the cornerstone and be ourselves living stones. He says, “Coming to Him as to a living stone, rejected indeed by men, but chosen by God and precious, you also, as living stones, are being built up a spiritual house, a holy priesthood, to offer up spiritual sacrifices acceptable to God through Jesus Christ (1 Peter 2:4-5).”

Paul also references the rejected Cornerstone in Romans 9:32 when he speaks of Israel not attaining God’s salvation that the Gentiles received by faith in Jesus. Paul says, “Because they did not seek it by faith, but as it were, by the works of the law. For they stumbled at that stumbling stone.” The Jews were stumbling over Jesus and were seeking righteousness and salvation through the law. Meanwhile, the Gentiles were becoming children of God through their faith in Jesus. As we look at this passage, we can hear echoes of what John the Baptist said to the Pharisees and Sadducees about stones in Matthew 3:9: “Do not think to say to yourselves, ‘We have Abraham as our father.’ For I say to you that God is able to raise up children to Abraham from these stones.”

Are we knees knocking, or bowing with bended knee?

“All hands shall be feeble, and all knees shall be weak as water.” – Ezekiel 7:17

“Strengthen the weak hands, and make firm the feeble knees. Say to those who are fearful-hearted, ‘Be strong, do not fear! Behold, your God will come with vengeance, with the recompense of God; He will come and save you.’” – Isaiah 35:3-4

In the Old Testament, the word knee or the concept of kneeling, or “knocking knees” is equated with fear or weakness. Even today, the idea of “knocking at the knees” seen as an image or word picture of fear. The New Bible Dictionary emphasizes that people in Old Testament times understood references to knees as “concrete imagery” that “expresses weakness or fear as ‘feeble knees’ (see Job 4:4, Isaiah 35:3, Nahum 2:10, and Daniel 5:6).”

In the New Testament, knees are referenced in connection with bowing in most cases. According to The New Bible Dictionary, “this action may indicate a sign of respect, or subjection (see Romans 11:4 and 14:11).” Simply put, bending your knee is a picture of adoration or worship. It is also a posture of prayer and humility (see Luke 22:41, 1 Kings 8:54, and 1 Kings 18:42).

One of the more famously recognized verses of New Testament scriptures about kneeling is in reference to Jesus’ Lordship. Paul writes to the Philippians, quoting Isaiah 45:23, “That at the name of Jesus every knee should bow, of those in heaven, and of those on earth, and of those under the earth, and that every tongue should confess that Jesus Christ is Lord, to the glory of God the Father (Philippians 2:10-11).”

Are we stumbling on stone, or standing on stone? Are we knees knocking, or bowing with bended knee?

Posted by Robbie Pruitt at 7:03 PM No comments:

Waiting on The Gift: Simeon and Anna 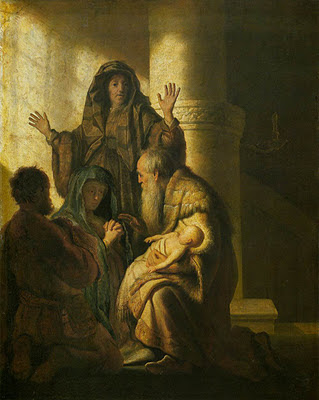 Simeon and Anna Recognize the Lord in Jesus
Painting © 1627 by Rembrandt Harmenszoon van Rijn
“Comfort, yes, comfort My people!” Says your God. “Speak comfort to Jerusalem, and cry out to her, That her warfare is ended, That her iniquity is pardoned. . .” -Isaiah 40:1-2

The message below was given at a chapel service on December 7, 2011 to middle and high school students and teachers. This message is on Luke 2:22-38 and is about Simeon and Anna waiting on The Greatest Gift ever, our Lord Jesus.

Comfort! Comfort!
(Luke 2:22-38) My eyes to your salvation gaze
To the light that turns my night to days
Behold! Your salvation I see!
Before death, when I taste eternity
Waited, waited, and waited
For comfort to come
In the Temple’s Holy sanctum
I have seen your consolation
For this, and every nation
Our souls to rescue - Save!
You comfort . . .
Our fear we brave!
In your glory we bathe
Comfort! Comfort!
We are not in want
“May I see the consolation of Israel!”
Experience fulfillment of this narrative’s tale
Anna waits in expectancy
And death knows no reality, until mine eyes can see
Salvation which dawns to eternity
Simeon is my name
Waiting until The Lord’s Messiah came
Basking in His glory and fame
Watching as He removes our fallen shame
A light for every Gentile
To Israel and all people; for all the while
Asher waited too
Holding her beauty through and through
Waiting for consolation; Comfort! Comfort!
A patient bride without effort
Daughter of the face of God
Partaking in the journey to Heavenly sod
A beauty fit for Priest and King
Waiting on betrothal’s ring
And the Glory of the song that Heaven sings
The comfort that the bridegroom brings

“Lord, ﻿now You are letting Your servant depart in peace,
According to Your word;
For my eyes have seen Your salvation
Which You have prepared before the face of all peoples,
A light to bring revelation to the Gentiles,
And the glory of Your people Israel.” -Luke 2:29-32
Posted by Robbie Pruitt at 2:45 PM No comments: 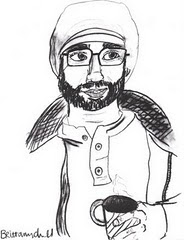